Season 3 reading list:
- Nicomachean Ethics - Aristotle
- The Republic - Plato
- Writings about Socrates (he didn't write anything himself)
- Apology - Plato
- Laws - Plato
- Phaedo - Plato
- Death: The Art of Living - Todd May
- Articles by Pamela Hieronymi (who was an early consultant for the show)
- Beyond Good and Evil - Friedrich Nietzsche
- Basic Writings of Friedrich Nietzsche
-Meditationes de prima philosophia (Meditations on First Philosophy) - René Descartes
- Leonine Edition - St. Thomas Aquinas
- The Most Good You Can Do - Peter Singer

We're watching a new guy wake up, put on an 8-track, get dressed, harvest, can (for donation), and eat some radishes, and make some notes in an accounting book, when there's a knock on the door. It's Michael and Janet, dressed as reporters, and they're here to meet (and pretend to do a human interest piece on) the most famous human in the afterlife, Doug Forcett (Michael McKean). If you will recall, Doug's the guy who ate shrooms and guessed like 95% of how the afterlife works back in 1972, and now he's living his life trying to get as many points as he can. (His friend, Randy, was less lucky in his hallucination: everything was made of ears.)

Good host as he endeavors to be, Doug gets Janet and Michael water (and some "ice cubes if it's too warm and a koozie if it's too cold"), which has an interesting taste because Doug has his "composting toilet hooked up to a water filtration system." Delicious!

Janet worries that Doug must get lonely living out by himself, but don't worry, he has plenty of friends! Like a snail. (He doesn't give the bugs and woodland creatures names in case they already have names, so he just addresses them as "snail" or what have you.) Doug only eats what he grows himself in his organic garden, and for the most part, it's radishes and lentils (require very little water and have a small carbon footprint). "The radish patch was actually here when I moved in. I thought it'd be mean to dig it up." Janet: "Mean... to the radishes?"

Doug's rescued all 71 stray dogs (including some wolves) that have wandered onto his property, which he keeps in a fenced in area, to which I say, is it really the best points-getting strategy to hold wild wolves captive? Seems like you'd LOSE points for trapping wild animals. Anyway, he's been mauled repeatedly in this effort.

Janet and Michael meet Raymond (Nicolas Cantu), a mean pre-teen who comes out to harass Doug because Doug'll do anything you tell him to, including Raymond's laundry or giving Raymond his shoe (which Raymond then throws into the woods).

Janet and Michael have to face facts: Doug isn't the blueprint; he treats himself horribly and lets people walk all over him because he thinks it'll earn him points. (Also, we know that the gang can't get into the Good Place because their motivations were corrupted by their knowledge of the afterlife, so how can Doug, gearing his life solely towards getting points, be considered to have good motives?) Janet calls him a happiness pump, which is a criticism of utilitarianism: "someone who's obsessed with maximizing the overall good at his or her expense." Michael: "I don't think he's miserable..."

Just then, Doug walks in with stripes of makeup all over his face. He volunteers to do cosmetics testing so that no lab animals have to get tested on, even though it feels like "wearing a mask of fire." He offers to let Janet and Michael move in with him, or to have one of his kidneys. He accidentally calls Michael "Mark" and has a full-blown meltdown, which ends in him offering to give one (or both?) of them a "really nice haircut," which, I don't know, if you saw the meltdown the guy just had you wouldn't really want him coming anywhere near you with scissors. In leaving to get the scissors, he steps on his snail friend!

Doug has a whole little cemetery, including "Rosa Parks the deer tick" and "Franklin Delano, raccoon." Michael and Janet attend the funeral of "Martin Luther Gandhi Tyler Moore snail," who Doug posthumously named that because he "imagine[s] him/her to be the greatest and most talented snail ever to have lived." Not super charitable to living snails, bro. I just don't think he gets how to get points at all. Doug has to leave right after the funeral because he's making a donation to the Canadian Mollusk Association, whose offices are in "Edmonton, so it'll take me about three weeks to walk there and back," but Michael stops him on the pretense of asking a few more questions. Really, he wants to try to get Doug to relax a little and take care of himself; surely Doug's gotten enough points to go to the Good Place by now. But, no, Doug's not going to travel or eat chicken parm or drink water that didn't come from inside him "because I can't risk it; there's an accountant out there, somewhere, measuring the value of everything I do. What if I relax and do something that loses me just enough points to keep me out of the Good Place?"

Well, yeah, Doug, it's a flawed system, but your motivations are garbage and self-serving and you're never going to get into the Good Place as the system currently stands, because you're not being honorable. You're just being a giant pushover, and the mysterious accountant is going to make all point valuations with your motivation in mind. Game over, Doug.

The gang is waiting for Janet and Michael at a bar. Chidi and Jason play pool ("special Jacksonville-style pool," in which you use your hands and if a ball goes in a pocket, you make up how many points you get - Chidi just slides a ball into a corner pocket and gets 5 million points), and Eleanor asks Tahani for advice (Tahani: "Is it about your grating speaking voice? I'm so glad that you finally brought it up") about Chidi. (Eleanor: "When is the right time to tell someone you were passionate lovers in an alternate timeline in the afterlife, but he doesn't remember because technically none of that happened in this strand of the multiverse? I'll just check with Yahoo Answers.")

Tahani's flattered Eleanor's come to her for advice (since, of course, she's sure that "the one constant in all the reboots is that you and I were best friends"), and makes the point that if Eleanor wants to tell Chidi about that reboot, she probably wants them to hook up now, in the current reality. It could end painfully, but it's generally a good idea to tell people how you feel. (Eleanor: "Thanks, Tahani. You made a really hot centaur.")

Chidi manages to shoot a pool ball like a basketball into a beer glass ("Jacksonville style, baby! 30 million points!") before Eleanor comes over to ask him to talk. She starts to spill all the metaphysical beans, when Bambadjan (Bambadjan Bamba) walks through the door of the bar. Because she's watched afterlife memories, Eleanor recognizes him instantly - as well as Vicky and one other demon who are also in the bar. Eleanor gets the gang together and is starting to formulate an escape plan when Jason lights a Molotov cocktail. He's about to throw it when a demon grabs him from behind, covering his mouth, and Vicky drops the Molotov flame-first into a pitcher of beer. Shawn walks in! ("Right, you don't remember. I'm Shawn. You are very scared of me.")

Shawn wants to wait to see the look on Michael's face before taking the gang to the Bad Place ("I love seeing the look on people's faces. It's the best part of my job"). Eleanor starts to talk big about how Michael's not coming when, of course, Michael and Janet walk into the bar.

Shawn: "These four humans are the legal property of the Bad Place. That's where we're taking them. [opens portal] And you."

What happens next is a fight scene. To be accurate, Janet fights all the demons while the rest of the Soul Squad try to not get dragged through the portal to the Bad Place. 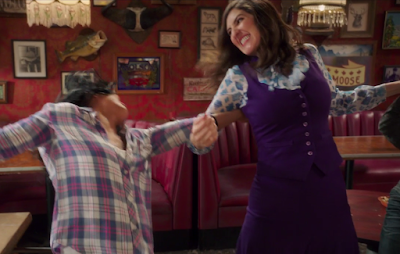 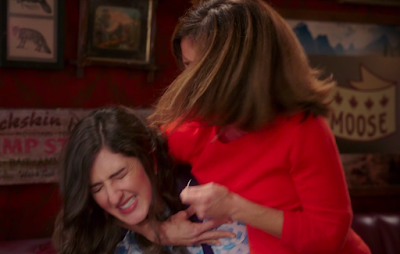 To be fair, Tahani breaks a pool cue over a shirtless demon's head, Michael uses the Key to portal some demons back to the afterlife, and Jason hits Val in the head with a pool ball when she's got Janet in a headlock, but this is really the Janet show. 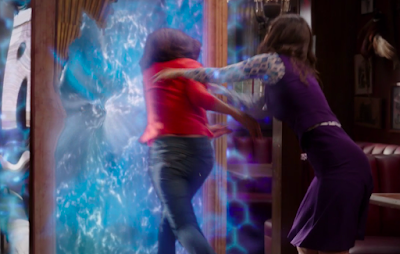 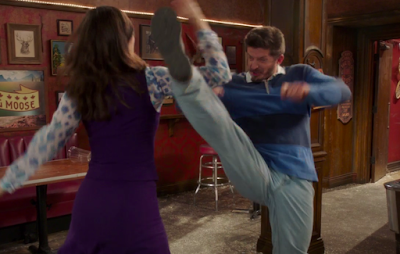 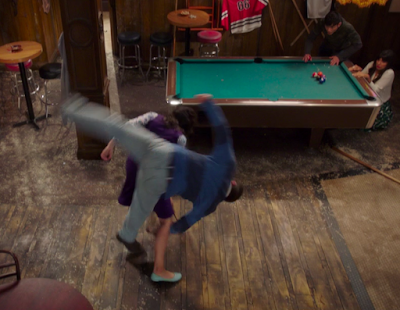 Eleanor: "Is it just me or is Janet a straight-up hottie right now?" It's not just you, Eleanor. She and Chidi are hiding behind the bar, watching the fight. Chidi suddenly thinks to ask Eleanor how she knew the demons were demons, and Eleanor decides, screw it, "we could die in the next thirty seconds. So, Michael showed me a memory of our time in the Good Place and you and I were, like, a thing. And" - brief pause for Eleanor to punch Vicky out - "not like a casual, hey I found two loose pills in the bottom of my tote, let's pop 'em and see what's good kind of thing. We were... in love, and... there's a real possibility that I'm in love with you, again, here, on this plane of existence, today. Now. In Canada. During this brawl... with demons."

Two demons grab Janet and start to push her through their makeshift demon door, but guess what? If even a little bit of Janet is through to the afterlife, she gets her powers back. Whabam! 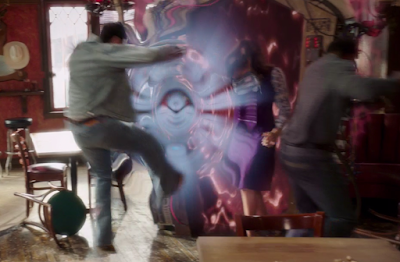 Shawn grabs Chidi and Eleanor and tries to force them through the Bad Place portal, but he shoves Janet through instead. She comes swinging out and kicks Shawn across the room.

They tie Shawn up and question him. Michael: "Why can't you leave us alone? You don't have enough nostrils to stuff with wasps?" But Shawn wants these four humans, and further, he says that the Bad Place is going to get them eventually, and their families, and even Doug Forcett. (Well, yeah, that is what I have been saying, come on.) He says it's just a hunch, and that he has a hunch about something else, but Janet kicks him through the regular afterlife portal.

Michael: "For a while now, I have felt like there was something wrong with how the points system was evaluating humans. At first I thought it was that the system didn't allow for the possibility that people could improve. That's why I convinced the judge to send you back to Earth, so you could confront the ways you were living. But now, I'm worried that the problems with the system might be much more serious. We need to gather some real evidence."
Jason: "Uh, sorry, no no, Michael, you're confused. Evidence isn't a good thing that you want, it's a bad thing that you have to destroy."

Michael and Janet have to go to the Accountant's office, where the points are decided. Michael tells the humans that they'll have to stay at Doug's house (and feed the dogs/wolves and do whatever Raymond tells them), but their plan-making is ruined when a bunch more demons walk through the door of the bar. Janet thinks she can take them all into her void, but, uh, "I don't know if you'll survive in my void, but either way, all of you will definitely die on Earth when I do this, so look around and say goodbye."
@ 20:07