Eleanor and Michael are in Tarantula Springs, Nevada, spying on Eleanor's mom.

Why didn't Michael tell Eleanor before? Well, he'd already told her she'd been tortured for centuries and she's doomed to be tortured again, so he "didn't want to be a bummer."

An actual cop came to Eleanor's house to tell her that her mom "had been accidentally trampled to death when she bent down to adjust her toe ring at a Rascal Flatts concert," but it turns out that the cop was an actor. Her mom faked her death because she got tanked and bid $30k at a charity auction for a date with Gene Simmons. Also, she stole Eleanor's fake ID name!

Donna Shellstrop (Leslie Grossman), aka Diana Tremaine, is living with her boyfriend Dave (Andrew Daly) ("He's super fancy; his napkins are made out of, like, shirt material") and his nine year old daughter, Patricia (Stella Edwards). Eleanor's not buying it: she's certain that Donna's running a scam, and she's going to prove it. Donna tells Dave that Eleanor is her sorority sister ("Good ol' Kappa Zeta... Jones").

Dave makes margaritas (which Michael and Eleanor can't stop drinking), and it turns out he's also an architect (Donna: "He's real good. You should see the new Hooters on I-15. It looks classy, like a bank"). Dave tells the story of how he and Donna got together, which involves her pulling a knife on him and them making out on a trash toilet in an alley.

Donna's running for PTA secretary! Eleanor's still convinced that somehow this is part of a scam. She's super determined to ruin everything for her mom. She tears apart Patricia's room looking for a big pile of cash, a sure sign of a Donna Shellstrop scam. Patricia comes in and tells Eleanor that Donna/Diana is really nice to her, and even gave her most of her stuffed animals.

Michael stops her, but it's okay, she's got a new plan: Michael will pretend to be rich and seduce Donna (Eleanor: "First things first: Do you have a penis?"). Michael is not on board, and declares that Eleanor must go to the PTA meeting to support her mother. (He was going for stern father figure, but according to Eleanor, he failed spectacularly.)

At the PTA meeting, Donna/Diana is giving a campaign speech, and Eleanor is busy rolling her eyes and eating a giant mound of cheese. 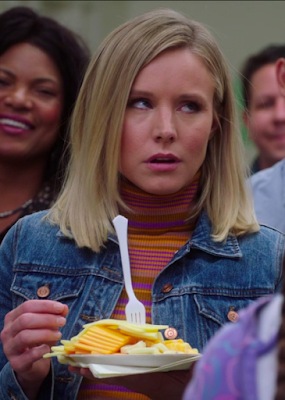 During Donna/Diana's speech, she has Patricia stand up because she wants to make the school great for Patricia. Eleanor looks stunned and angry about that pronouncement.

When the meeting breaks up and everyone's milling around (presumably to vote? Unclear), Eleanor confronts Dave and tells him everything: Donna/Diana's real name, that she's Eleanor's mother, faked her death, and changed her name. But, huh, Dave already knew everything, and kind of likes that Donna/Diana has a "bit of a wild streak" - she's even rubbing off on him a little!

Even this doesn't change Eleanor's mind. Coming clean must be part of the scam. Michael tries to reason with her; why can't she believe that Donna/Diana's turned things around?

Well, duh: because she's being a good mom to someone else, and she was never that for Eleanor ("I wanted the mom who made me afternoon snacks, instead of just telling me to look for loose fries in the McDonald's ballpit. I just wasn't worth changing for").

Later, Eleanor meets up with her mom in the garage, where Donna/Diana is doing laundry. Eleanor apologizes for not believing in Donna/Diana ("I just never thought I'd see the day where you made a commitment to... anything"). Eleanor offers to help with the laundry and picks up a box of laundry soap, but, whoops, THAT is where Donna/Diana has been hiding her stash of cash. Seems like it might be a con after all!

Eleanor finally tells her mother (yet another Eleanor pep talk) that she's really happy, and that she loves her suburban life, and that's okay. (Donna/Diana: "I'm not basic. Ya basic." Eleanor: "No, Mom. Ya basic.") Donna/Diana goes to yoga with other moms from school, and then they split egg rolls at the Cheesecake Factory and drink Chardonnay. With ice cubes. And Donna/Diana gets sleepy after one glass and switches to water. She's not the wild girl drinking 7&7&7s (seven shots of Seagram's Seven in seven minutes) anymore. She's happy in her suburban life, and Eleanor tells her that she has to stop stockpiling cash and really commit. They hug! One more successful Eleanor pep talk in the bank.

As Michael and Eleanor prepare to get back on the road, Michael gives Dave some architectural blueprints he's whipped up (Dave: "You've solved the whole thing! Uh oh: looks like you forgot to include bathrooms"). Eleanor says goodbye to Patricia ("Good luck on the SATs") and she and Michael get in the car. Eleanor tells Michael that she's a little sad, because Donna/Diana is the reason why she never felt like she could get close to anyone ("I never even told a boyfriend I loved him").

Michael: "You know how I told you you knew everything important about your life? Well, I wasn't thinking about your afterlife-life." Remember the tape from Mindy St. Claire's house? Where Eleanor and Chidi said that they loved each other?

These three are still in Budapest, waiting in line (Tahani: "I have never waited in any kind of formation before, let alone a line") to see Kamilah. Tahani's wondering if she shouldn't pick someone else to help ("like my good friend Ben Affleck and his crippling addiction to back tattoos, or my other good friend Matt Damon and his crippling addiction to my friend Ben Affleck"), buuuuuut Janet says that her relationship with Kamilah was a huge part of why she didn't get into the Good Place, ipso facto, it's endangering Kamilah's chances.

Turns out what they've been waiting for is the opportunity to have Kamilah make them an omelet and tell them something weird ("As a frog stares up in awe at the treetops, so too does humanity gawk at the purity of a blinding truth. Napkins and forks are in the back").

Tahani refuses to order an omelet and so Kamilah ends the exhibit. The audience is PISSED.

Jason and Janet have a little date-like thing where they wander around the museum and Janet tells Jason the values of the paintings. Janet's adorable and I really want her and Jason to work out, for her sake.

Tahani makes a sincere apology to Kamilah, who rejects it and and stomps away. Frustrated and somewhat enraged, Tahani throws an egg onto one of Kamilah's paintings (which, of course, is seen as another work of genius by Kamilah by her adoring public).

Chidi goes to intercede with Kamilah on Tahani's behalf, but she seduces him quite easily (apparently Chidi is an Igbo (a tribe in southeastern Nigeria) word that means "God exists," and she snatches the air around him and declares "All of your fears are now mine," which I guess is all it takes for Chidi to become enamored of someone). He walks back to Tahani in a daze and, disappointed in his failure, Tahani grabs an axe that was on one of the gallery walls and attempts to threaten Kamilah into accepting her apology.

Kamilah scoffs; another dramatic Tahani threat with no followthrough. Then, of course, Tahani swings the axe into the table and security guards rush at her.

Chidi tries to reason with Tahani as they sit handcuffed on a bench in the museum ("You don't think [your parents] would be proud of her for having a whole museum wing dedicated to her work?"). Tahani thinks her parents were essentially impossible to please, and for Tahani and Kamilah's whole lives (up until their parents were cryogenically frozen), their parents pitted them against each other. We see a flashback to ~12 year old Tahani and Kamilah, where their parents have them compete in a painting challenge ("Each of you has four hours to complete a rendering of your favorite moment in French military history"). The winner got her work displayed during a party; the loser has her painting used as kindling.

Tahani realizes that all of Kamilah's paintings show their family relationship.

Tahani walks over to Kamilah and lifts her handcuffed hands to envelop Kamilah in a hug. She apologizes again, and says she understands that Kamilah can't accept it, because her art would suffer, but that they way they were treated wasn't fair. Finally, Kamilah hugs her back ("[Our parents] were wankers, weren't they?"), and they share a very nice moment before Kamilah has Tahani and Chidi released from their cuffs.

Of course, this results in more of Kamilah's audience thinking she's the most amazing, magnanimous creature on Earth, but what can you do? Her public adores her.

On their drive to the airport, Chidi shows Tahani an article about Kamilah's exhibit, which Kamilah has credited to herself AND Tahani. Progress!
@ 14:11