the good place, s03e05: the ballad of donkey doug

With the newfound knowledge that Janet knows everything in the universe, Eleanor quizzes her about what other people thought of her in high school. ("No way! I thought she was intimidating! That's why I shoved her into that creek.") Chidi has news: he got fired, and he has to break up with Simone so he doesn't accidentally curse her into eternal damnation.

He can't lie, so Eleanor says he should ghost her ("Bonus: anything she left in your apartment now legally belongs to you"), and that she's done it to dozens of people and they all got over it (Janet: "Actually, none of your exes have ever gotten over you." Eleanor: "You're damn right they didn't").

Janet has an idea: she'll create a virtual reality device that'll let Chidi practice the breakup. Also, she can't just appear anymore and so the little "bing" that normally accompanies her appearance isn't there, so she's started saying "bing" instead. She's also very embarrassed at having to walk places.

Janet has successfully assembled a virtual reality machine that knows "everything about [Chidi's] personality, Simone's personality, and all human relationships. Plus, it has tetris." Eleanor wants to know if the simulator would work for her, Jason Statham, and a room with a futon and a lot of Red Bull. (Janet: "Why is it that every time a new thing is invented, humans immediately try to use it for porn?" Eleanor: "Because we're disgusting.") Janet and Eleanor are able to watch what's happening in the simulation on a monitor, and with that, Chidi puts in the earpieces and is transported to a cafe, where Simone is sitting at a table.

Chidi practices breaking up with Simone a lot of times. Some highlights: 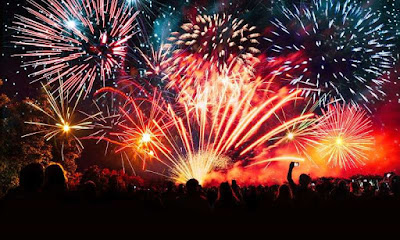 Chidi pulls Eleanor out of the simulation before any makeouts can occur. Friggin' killjoy.

Chidi's ready to actually do this thing! (Chidi: "I've analyzed the ten most successful scenarios and compiled the statistically most effective breakup strategy." Eleanor: "Who said you weren't a romantic?" Chidi: "Every girlfriend I've ever had.") He meets up with Simone at French-Pressing Nemo Cafe, but Simone (gasp!) is sitting at a different table than in the simulation! Further, unlike the simulation, they're interrupted over and over by overeager waiters.

Flustered, Chidi abandons his plans ("It's complicated, but it's happening. Ya dumped"). Unsurprisingly, Simone doesn't take it well, and storms off.

Back in the office (which somehow they're still using even though Chidi got fired?), Chidi's panicking that the way he dumped Simone might send her spiraling down a bad path and ultimately into the Bad Place. Eleanor once again gives a successful pep talk. She should consider becoming a public speaker or something, her pep talks pretty much always work, even before she started being a better person. Chidi heads off to talk to Simone, and Eleanor asks if she can use the simulator ("There's a very specific Lenny Kravitz concert I want to be front row at"), and Janet agrees, with a slight caveat ("FYI, when the system boots up, you might find yourself in a steam room with Jason, who will be wearing an old-timey strongman onesie. It's a bug in the system").

Chidi sits down with Simone and actually does a good job of calmly, if sadly, going over his feelings. (Simone: "Well, see you in the next life." Chidi: "What?! Why did you say that?! What do you know?!" Simone: "You're so weird, man. I think maybe this is for the best.")

These three are in Jacksonville! Jason's going to show them all the sights ("like that swamp is where me, Pillboi, and Donkey Doug (Mitch Narito) used to stand and try and blind pilots with laser pointers"), but first, they should get to work on saving Jason's father's soul - Jason's father, of course, is Donkey Doug (Tahani: "The Donkey Doug who is banned from Disney World for biting Buzz Lightyear?" Jason: "In his defense, he thought it was someone else").

Donkey Doug's problem is that he's always on some get-rich-quick scheme, selling counterfeit truck nuts, a sport that "was a cross between dodgeball and horseshoes, and everybody died." Jason doesn't think they can just give him money to make him stop with the schemes, so the plan is to try and get DD to finish getting his electrician's license.

Jason introduces DD to Michael ("Oh, crap, you look like a cop. Are you a cop? Because if you are, you have to tell me, and you're not allowed to arrest me for anything you saw before I knew you were a cop") and Tahani ("How about you and me go check out my jacuzzi and put stuff in each other? Wow! That's the first time that line has ever failed. You must really love him. Welcome to the family!!").

Pillboi's here because he and DD have an exciting business proposition! ("And this time, it's NOT fake meth.")

That's right: their invention is a combination energy drink/body spray. 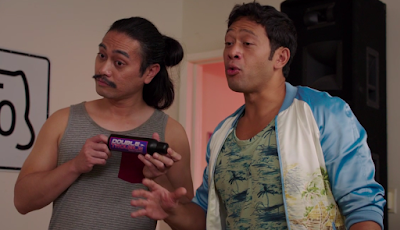 Michael: "So, do you spray it on yourself, or do you drink it?"
Pillboi: "You both it!"

(Tahani: "There's an awful lot of dog hair on the furniture and I have not seen a dog.")

Jason tries to get DD to think long-term, but DD and Pillboi are committed to Double Trouble (Tahani: "I suppose a little entrepreneurial spirit never hurt anyone. Reach for the stars, as I said to my good friend, Elon Musk. And then he shot his car into space! What a weird creep. Why was I friends with him?"). They're also committed to their plan to rob an energy drink factory and a cologne factory for supplies to make Double Trouble (DD: "And then we just gotta bottle it all up! Oh, dip, we gotta rob a bottle factory").

Jason decides that maybe saving his dad's soul is a lost cause, but there's still something the Soul Squad can do: save Pillboi.

Tahani approaches Pillboi at his job at the old folks home, where he (woah, meta) hands out pills to oldies, and tells him that there's been a change of plans and he's not going to be robbing anything. He easily agrees and offers her some pills.

Jason meets up with DD in a factory (DD: "If you're here to tell me an energy drink body spray is a bad idea, I've heard it before from a bank and some doctors"); Jason's there to help, but tells DD that he has to leave Pillboi out of his schemes and crimes from now on. The cops show up, and DD tells Jason to make a run for it - he's going to take the fall. ("It's what my dad did for me, and his dad for him, and someday, you'll do this exact thing for your son.") He opens the factory door, screams "BORTLES," and runs away, while Jason sneaks out the back. 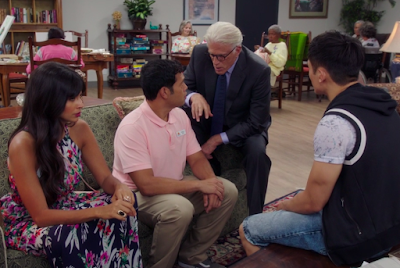 Michael: "So, your covert mission is to continue to report to this job until you receive our signal. This is the most important thing: you cannot commit any more crimes, and you must help these people as much as you can."
Pillboi: "Man, I can't believe this whole time you guys were with NASA!"
Tahani: "Yes, we are secret astronaut spies. That is indeed what Jason told you."

Crying, Jason and Pillboi go through an elaborate handshake: 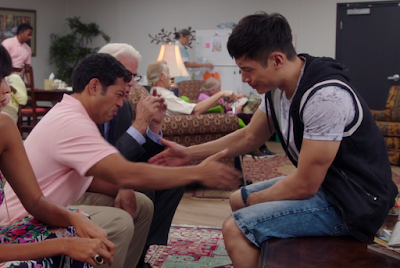 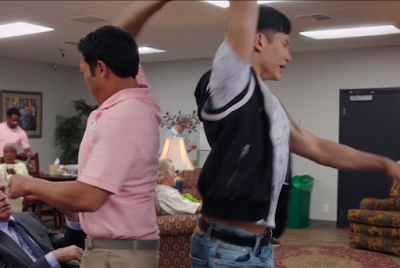 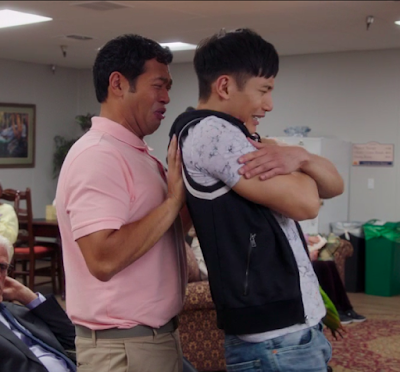 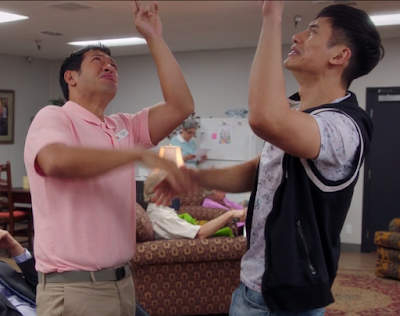 Two days later, the Soul Squad reunites in Budapest, ready to head to Tahani's sister's art exhibit. Jason says how great he feels about saving Pillboi and getting closure with DD. Eleanor wishes she could get closure with her parents, but they're both dead.

Janet: "So, the thing is, one of your parents is not technically, actually dead."
Michael: "Your mother's alive. She faked her own death."
Eleanor: "I'm sorry Tahani, I don't think I'll be able to stay with you here in Budapest. Turns out my mom isn't dead, so I need to fly back to America TO MURDER HER."