Michael: "Oh hey guys, what are you doing down here?"
Chidi: "We came to get more champagne, which is behind the magic door."

Ah yes my friends, the gang did not just see the door, but they also overheard the part about the Good Place and afterlife points. Better still, everyone remembers Michael from when he interfered before. Janet and Michael have to come up with a way out of this, and fast. (Michael: "But you're forgetting one crucial piece of information, right?? I mean, you're forgetting one crucial piece of information that'll save us?!")

Michael tries the old we're-with-the-FBI-and-you're-in-grave-danger gambit, but Eleanor knows a fed when she sees one and these two are definitely not feds. What are Janet and Michael to do? (Michael: "Serious question: should we kill them?")

There's no getting the gang into the Good Place anymore; they know how the afterlife system works, and their motives for good have all been corrupted by that knowledge. (Michael: "So sorry for eternally dooming you." Janet: "That's our bad, guys.") But how is it that they were tortured for 300 years in the afterlife and no time passed on Earth? 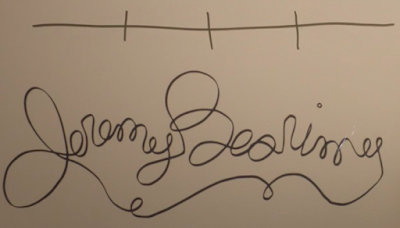 See, time on Earth works like the top line: things happen one after the other in a predictable fashion. In the afterlife, though, time moves in loops and flips back on itself in such a way that looks like it says Jeremy Bearimy. Thus, 300 years can pass in the afterlife without having any effect on the passage of time here. The dot is Tuesdays, and also July, "and sometimes it's never" (thanks, Janet), or the moment when "nothing never occurs."

Eleanor is looking forward to going back to her old ways of only caring about herself ("See you in hell. *gasp* You know what I just realized - I always say that when leaving a room, but right now, it's accurate. I will literally see all of you in hell." Jason: "Not if I see you first!"), and the rest of the group is also dejected, broken, frustrated; pretty much every emotion you might feel if you found out you were definitely going to a hell-type place to be tortured for eternity and there was absolutely nothing you could do about it.

Eleanor goes to a bar and bullies her way into a free drink. Eleanor is making something of a manifesto, ranting at the bartender who caved to give her a free drink. ("Rule number two: No more Spider-man movies.") The bartender says that if everyone does whatever they want, society would break down. "In America, everyone does whatever they want, society did break down, it's terrible, and it's great! You only look out for number one, scream at whoever disagrees with you, there are no bees because they all died, and if you need surgery you just beg for money on the internet. It's a perfect system!" She finds a wallet on the ground, but she can't make herself take the money from it. Instead, she takes a very expensive cab ($58!) to return the wallet, and when she finds out that he moved, she takes not just the wallet but a bunch of items that he had left behind.

When she finally finds him, the man whose stuff she has rifles through his wallet to make sure that not his cash, but something else is still there: 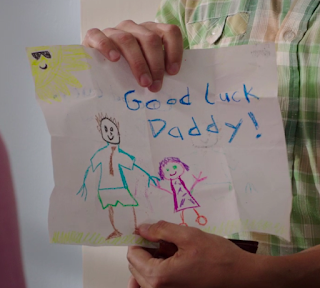 His daughter drew it for him when he was nervous about starting a new job, and looking at it makes him feel safe. You can almost see Eleanor's heart growing as he tells her this, and she starts crying.

Tahani gets Jason to be her bodyguard ("like my friend, Kevin Costner, in that movie where he was a bodyguard. The Bodyguard."), takes a giant amount of cash from her safe, makes a gift of $2 million to the Sydney Opera (which she wants to remain anonymous (Jason: "Why don't you want your name on the opera house? I love getting my name on stuff. In Jacksonville, I got a flu virus named after me cuz I kissed a bat on a dare.")), and then she and Jason roam the streets of Sydney, handing out cash to anyone they pass. You see, Tahani realized that she went to the Bad Place because she wanted attention so badly, and now she's decided to be virtuous for virtue's sake.

Jason tells Tahani that the chunk of money he's currently holding could have changed his life at a lot of points in his life ("I could've gone to a real doctor, instead of pretending I was a big dog so I could go to the vet"). That gives her an idea ("which I suppose one could argue means that anything could have given me an idea"). She takes Jason to the bank to try and transfer her entire 131 million GBP fortune to him, but the bank manager refuses to do it, not even if he just puts it on a GameStop gift card as per Jason's suggestion.

Chidi wanders through a park looking shellshocked (drug dealer: "Hey - you wanna talk to God?" Chidi: "God is dead. God remains dead and we have killed him. Who will wipe this blood off us? What festivals of atonement, what sacred games shall we have to invent?" he says, devolving into screams and shaking the drug dealer by the lapels (by the way,  Friedrich Nietzsche said that)), and when the sprinklers turn on around him, he just pulls off his shirt and sweater and walks away.

He wanders shirtless through a grocery store. He flings large amounts of canned chili, Peeps, and M&Ms into his cart.

He gives his credit card and car keys to the checkout woman. How he's going to get his $880 worth of terrible groceries anywhere is beyond me.

When he gets back to his classroom, he puts all of the chili, Peeps, and M&Ms into a giant pot and sings to himself as his students stare at him. ("I'm going to eat all this chili, and/or die trying.") One of his students asks if he can teach them literally anything, and he actually kind of teaches, so I'm going to include it all here:

"I'm going to teach you the meaning of life. How do you like them apples? Now, over the last 2,500 years, western philosophers have formed three main theories on how to live an ethical life. First off, there's virtue ethics. Aristotle believed that there were certain virtues of mind and character, like courage or generosity, and you should try to develop yourself in accordance with those virtues. [shows Tahani and Jason making the gift at the opera house]

"Next, there's consequentialism. The basis for judgment about whether something is right or wrong extends from the consequences of that action, how much utility or good it accomplished versus how much pain, or bad. [shows Tahani and Jason handing out cash]

"And finally, there's deontology, the school of thought that there are strict rules and duties that everyone must adhere to in a functioning society. Being ethical is simply identifying and obeying those duties, following those rules. [shows Eleanor returning the wallet]

"But here's the thing, my little chili babies, all three of those theories are hot stinky cat dookie. The true meaning of life, the actual ethical system that you should all follow, is nihlism. The world is empty, there is no point to anything, and you're just gonna die. So do whatever."

But as the students clear out, Eleanor's standing there because she has a plan. 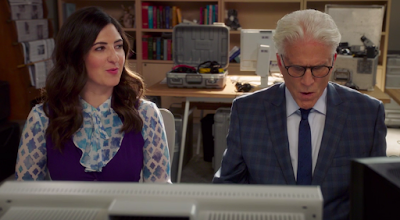 Michael and Janet decide to write an actual manifesto of everything they've learned from their time with the gang and a recommendation of how they feel the afterlife could be improved. They're planning on turning themselves in and they're hoping that someone else can learn from their failure. (Michael, by the way, is horrible at typing, and poor Janet watches him struggle (proudly) for a few moments before taking over.) When they finish, they have a chunk of paper even bigger than Chidi's old thesis (which includes "a pretty tasty little recipe for cinnamon rolls made out of pizza dough," which I want, so I guess I'm going to spend the evening googling for recipes).

"Maybe someone someday can learn from our mistakes, and enact real change in the process of judging people. But, for now, Janet, old friend, we are going to enjoy our time on Earth before we're retired."

Eleanor leads Chidi into Michael and Janet's office, having started to accept their fates, and Tahani and Jason show up too, because they got tacos! No, wait, they got married. But also tacos. Poor Janet freaks out just a bit, but it's okay: it's a platonic arrangement, just so Tahani can give Jason half of her money. But, if you'll remember, Eleanor has a plan, and it's simple: to try to do good. "The six of us are not getting into the Good Place, but there are still people in this world that we care about, so I say we try and help them be good people, try to help them get in."

They're all in, and they've got a new name: the Soul Squad.

Oh, and there's Larry, who Tahani definitely did not completely forget about at all, ready to pick her up to go to the airport and start their lives together. Oh, Larry. You poor son of a bitch.
@ 18:53