Season 3 reading list:
- Nicomachean Ethics - Aristotle
- The Republic - Plato
- Writings about Socrates (he didn't write anything himself)
- Apology - Plato
- Laws - Plato
- Phaedo - Plato
- Death: The Art of Living - Todd May
- Articles by Pamela Hieronymi (who was an early consultant for the show)

Janet and Michael are back on Earth, and they've got the Key so nobody's getting through the door that the Doorman guards, BUT the Key starts ringing and guess what, it's a video chat from the Judge! ("I have never been this angry in my life, WHICH IS THE AGE OF THE UNIVERSE.")


Michael says that saving the gang's souls is just too important, and then he and Janet try to hang up the call by stepping on the key. It doesn't seem to work.

They find a vacant office (sorry, floor) at the university where Chidi works (it's the journalism department #RIP), and they set up shop. Janet already set up cameras and mics in the office where they do the ethics lessons (seriously, where are Janet and Michael getting their funding?), so they've got eyes and ears on the situation, but they're not sure how exactly they're going to help. ("Oh, no. Eleanor farted and then she blamed it on her chair. That's going to cost her at least a few points.")

Michael sent an email to Chidi "from Trevor" dropping out of the study ("I'm going home to my mommy"), so the gang is back to the usual four + Simone. They got funding from the neuroscience department! Hooray! We then get a quick montage to show that three months of the study have passed.

At this point, Eleanor is broke. How she managed to stay in Sydney and eat and buy shampoo and whatnot for three months, I have no idea, but now she's looking for a side gig. Her skills? Telemarketing, telling how long to microwave food without looking at the box, aaaaaand that's kind of it. Michael doesn't want Eleanor to get a job because then she'll miss class, so he comes up with a plan: he and Janet buy a lottery scratcher (they were printed before they left the Place, so Janet knows which ones are winners), and they leave it for Eleanor to find. Janet still knows a lot, even about the guy who sells them the ticket ("the woman that you think is your aunt is actually your mom"). Michael's calling this "the snowplow": clearing the road so that Eleanor can drive smoothly.

Eleanor won $18,000 (Tahani: "Better luck next time"), so she's golden! We get another mini montage and another three months have passed.

Poor Jason has to watch Jaguars games all alone! Tahani says she'll watch with him (but she's gotta learn Jason's chant: "Let's go Jags! Kick their ass! Yeah!"), because she's, "as you might say in America, mad horny." Michael doesn't want them to hook up (and Janet's not too broken up about getting in the way of that), so they decide to break out the snowplow again. Also, Michael wants to get them better computers - again, how do they have money - and if Janet's going to the mall anyway, she "might as well pick Jason up some jean shorts... so that he can study better." Sounds like Tahani's not the only one feeling frisky.

This leads to a "chance" meeting between Tahani and Larry Hemsworth (you may remember we saw him last time on AUS Weekly), her ex. Poor Larry has a case of horrible self-esteem ("I never expect anyone to remember me, because I'm only 6'4" and I have one of those forgettable faces"), but he and Tahani get to talking, and they share a hatred of hearing about their more famous, successful siblings. Janet's there to watch and tend bar (and, when questioned about her presence, tells the bar employee that his ex-wife still loves him but is afraid to call - just can't stop meddling, can you, Janet?). Tahani stood Jason up to get busy with Larry, but Jason got invited to a Jaguars fan club (in Sydney? Really? There aren't that many Jag fans in the US, I don't think), so he doesn't care. Everyone's happy!

Another mini montage: this time, six months have passed, including Chidi's birthday. The year of the study has been great for all of them; they're better people, they've got better equipment ("Super board, activate!"). Great news for Tahani: she's engaged!

She and Larry are going to move to London to plan the wedding! Michael and Janet go into crisis mode. Tahani throws a super casual, come-as-you-are engagement party at her Heir B&B.

The rest of the gang and Simone finally meet Larry, "a dumb old pediatric surgeon who barely has an 8-pack." (Chidi: "Do you know what you look like?") Michael and Janet are at the party as cater-waiters. Michael is determined to keep the group from breaking up, whereas Janet is considering a more hands-off approach. In the end, they get Larry on his own and try to chip away at his confidence about moving to England. He immediately thinks they're working for a gossip mag (and also says he's taking Tahani's last name, which, this keeps coming up as a joke on shows? Men taking women's last names? There's literally zero reason besides the patriarchy why that seems silly), so that plan backfires.

Chidi and Simone tell Eleanor, in so many words, that her participation in the study is basically over. They'll move on, analyzing data and finding a new cohort to repeat the experiment on. Poor Eleanor! She's really not ready for the study to be over. All she's got back in Phoenix is a punch card to a spray tan place ("They'll do my left side for free, so..."). Janet overhears this and she and Michael try to regroup.

Michael approaches Eleanor with a tray of shrimp, hoping that she won't recognize him from the last time he interfered, and commiserates (feeling like "at any moment, the universe could fold up around you and squeeze the last breath from your dying lungs"). He tells her to tell the group how she feels, because they're probably just waiting for someone else to say something.

Tahani gives a toast to the Brainy Bunch, thanking them for inadvertently reconnecting her with Larry. She calls Eleanor up to say a few words. Eleanor gives a short, heartfelt speech, but when Chidi starts to shut down the idea of keeping the study going, she freaks the hell out and destroys the cake Tahani had made with a picture of the gang.

Later, Simone finds Eleanor hiding behind a plant, waiting for a cab, holding two stolen bottles of wine and still with a handful of cake. 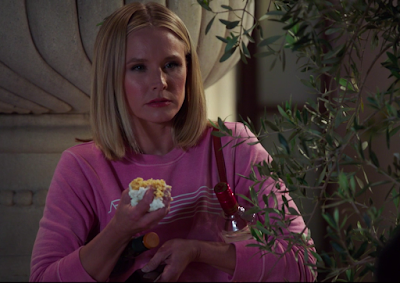 After being kind of jerky to Simone, Eleanor asks her if she can explain why Eleanor did and said what she did at the party. (Simone: "I mostly do clinical research in neuroscience. I don't really specialize in temper tantrums. Maybe you need a child psychologist. Or a binkie.") Simone actually gives a really thoughtful response, and I'm going to quote a bunch of it here:

"Okay, here's my guess. As humans evolved, the first big problem we had to overcome was me vs. us; learning to sacrifice a little individual freedom for the benefit of a group. You know, like sharing food and resources so we don't starve or get eaten by tigers, things like that. The next problem to overcome was us vs. them, trying to see other groups different from ours as equals. That one, we're still struggling with. It's why we have racism and nationalism and... why fans of Stone Cold Steve Austin hate fans of the Rock."
(Eleanor: "No, we hate the Rock because he went Hollywood and Stone Cold keeps it real, so the Rock's fans are the real jabronies... Point made.")
"What's interesting about you is, I don't think you ever got past the me vs. us stage. I mean, have you ever been part of a group that you really cared about? The Brainy Bunch is basically the first group that became a part of your self identity and now that it's breaking up you're feeling this new kind of loss, and you're scared of going back to being alone. I mean, that's my guess. The other possible medical diagnosis is that you're just a bit of a dick."


Eleanor goes back in and apologizes to the group, saying that she's just going to miss everyone. Tahani comes up with an idea to have an annual reunion (Chidi: "Next year in Jacksonville!" Jason: "Yeah! Uh, we might not want to wait a whole year, [Jacksonville] is sinking really fast [into the ocean]."). They're going to have a toast, and it seems like they're going to part on really good terms.

Meanwhile, Michael is still trying to fix it ("I think I figured out a plan where they stay in Australia and only five random bystanders get hurt. It's called arson."). 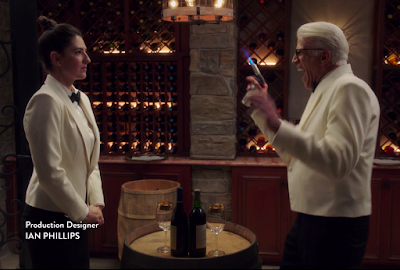 Janet says it's time to park the snowplow and let the gang make their own progress. Michael thinks no, a better plan is to break into the Judge's chambers and reset the entire timeline - so, like, the entire planet goes back to the moment when the four of them died. All they have in the universe is these four humans; once they go back home, Janet's going to be marble-ized and Michael's going to be retired. Janet agrees, and they use the Key to open a portal to the Place.

"What the hell is that?"