oh my god, you guys

Dude, y'alls, OUaT is getting SO REAL, FOR REAL.

Spoilers under the cut.

Okay, so, this week's episode, some ish went down between EQ and Rumplestiltskin. I'm not sure that there's any more to their joint backstory than a competition for bigger baddie or power supremacy or whatever you want to call their penis-measuring contest, but good lord things got real this time.

We had an actual admission of the crossover by both EQ and Rumplestiltskin in non-fairy-tale land. We had EVEN MORE Rumplestiltskin backstory (which I can't get enough of, by the by) where he has a completely tragic love story and he's apparently the Beast, a la Beauty and the.

I actually thought that combination of Rumplestiltskin and Beast was pretty elegant. They're really putting the entire canon of fairy tales through their paces, and honestly, Storybrooke was getting kiiiiiind of crowded with all the mythology they were cramming in there. Rumplestiltskin as a cursed dude with a smart, capable lady who is able to see past the cursey trappings and love him anyway?

Oh my god, and EQ is hiding her as a psych patient in the creepiest underground hospital facility since Silent Hill? Brilliant.

Seriously, I have a lot of respect for this show. There is a hell of a lot of story to track, and the storyboard for the season (or possibly the whole damn show - I'd believe they already have the last episode written) has to be the size of a football field.

Though, really, you could get rid of everyone but EQ and Rumplestiltskin and it would still be great. It's like this quote I keep seeing bandied around - fiction's harder than reality, because fiction has to make sense. This show has fictions layered on top of each other, to the point where you're sure of nothing and maybe there is no truth. Who knows. 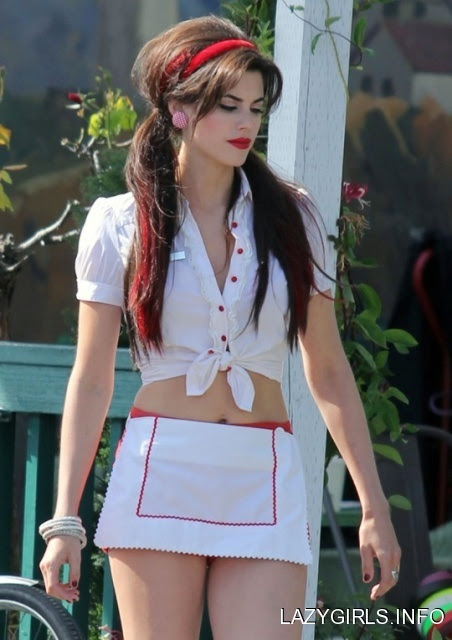 Actually, I lied. I would be pissed if Red and her shorts didn't continue to arbitrarily show up and be randomly sexy for no discernible plot advancement. I hope they get more into her backstory so that we get a whole episode of completely insane wardrobe choices and Amy-Winehouse-meets-Nicki-Minaj hair.
@ 07:43