redbeanbun goes to the theater: matilda the musical


So my favorite part of Matilda (the Musical) was that basically every part (except Miss Honey, pretty much) was a character actor part. Everyone (except Miss Honey) was completely over the top and incredible. Mr. Wormwood sprang around on pliéd legs like some kind of deranged David Tennant-as-Barty Crouch Jr. or gigantic grasshopper, and his floppy peroxide'd hair was -

Okay wait, so my favorite part of Matilda (the Musical) was how incredibly well the costumers made the characters look like living cartoons from Quentin Blake's hands. From Mrs. Wormwood's voluminous bouffant and breasts to the Trunchbull's massive shoulders to Amanda Thripp's pigtails to the fact that everyone moved in amazing Graham-esque brusque choreography, everything was illustration-perfect - 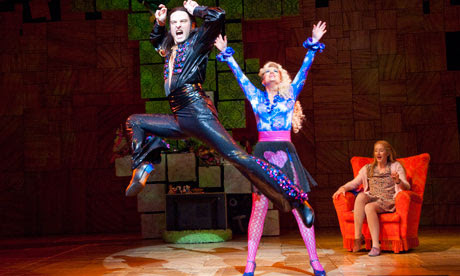 Okay wait, so my favorite part of Matilda (the Musical) was the incredible stage effects, from Amanda Thripp being tossed by her hair to Magnus writing on the chalkboard. The sets were completely amazing, and involved a very complicated floor that had many moving sections and changed from flat to desks to a bathroom wall and back again.

But actually, my favorite part of Matilda (the Musical) was how it was an incredibly true adaptation of the book. I love that book - I've read every Roald Dahl children's book and most of his more adult works, and the last time I read one was maybe two months ago. They're what I remember learning to read more complicated books on, and they're what I remember hiding out in the library stacks with. I'm also an incredibly harsh judge of book-to-[movie/play/musical/avant-garde modern dance production in the woods].  I won't get mad at the Hunger Games for not actually making their young actors starve themselves, but I will get mad over the lack of a cave or the physical notes Katniss got from Haymitch.

What I'm saying is that I get very attached to books, and I get very upset when I see them represented incorrectly.

Surprise two: I'm not going to say it was an improvement over the source material, but I may think it kind of aggressively.

Surprise three: I think that if Roald Dahl had watched that musical, he would've been really pleased.

It may have thrown out some plot points and rearranged others to be more thematically useful, but the thing that stayed true was the feeling, the darkness and the subtle humor, that anyone who remembers any Dahl will recognize. The fact that almost all of the music was either choppy and atonal or imbued with quiet sadness or wildly irreverent makes you know just how much the writers (book and music) understand Matilda and her strange powers.

The only thing I was sort of bleh about was Miss Honey, but then, she's just supposed to be nice and meek. Sooooooo I guess she was on par with what you'd expect.

OH AND PS: It appears that the casting is largely race-blind. That also made me really happy. Sorry I forgot for a second.
@ 12:03

Email ThisBlogThis!Share to TwitterShare to FacebookShare to Pinterest
obviously -> i totally write about music sometimes, matilda the musical, redbeanbun goes to the movies, roald dahl is my patronus, things to do in the real world
Newer Post Older Post Home