sunday night shows (i know it's tuesday, shut up)

REVENGE! REVENGE. REEEEEVEEEEEEEEENGE. [OUAT is below the jump, with the Revenge spoilers.]

I also realize that gif is not from last night's episode. I don't know how to make gifs.

1. That Amanda may be DEAD. Or DYING. She's in a goddamn COMA. THIS IS SOME STRAIGHT UP DAYTIME SOAP BUSINESS, FOLKS. We are nearing someone's long-lost twin showing up and trying to take over their empire (Conrad, I'm looking at you here).

2. That Emily is possibly going to have a relationship? With a guy? Who she trained with in Revenge Studies at Hey Look We're In Japan Now With a Different Guy Than Last Season School for Revenge and Vengeance? WHAT.

3. NOLAN IS FINALLY GETTING SOME NON-LUNATIC ACTION FROM REBECCA FROM GREEK. I CAN'T. I CANNOT. I CANNOT. IT IS SO GOOD.

OH MY GOD. YES. YES. I WILL WATCH THIS GIFSET FOR EVER AND ALWAYS AND ALL TIME. ALL I EVER WANTED WAS FOR NOLAN TO BE HAPPY. /dies. 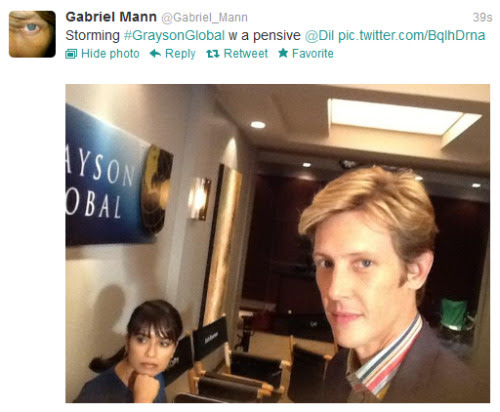 4. And finally, probably the biggest reveal of the night:
EMILY'S MOTHER TRIED TO F'ING DROWN HER. AS A CHILD. WITH NO CANONICAL EXPLANATION. WHAT IN THE WHAT. AND THEN SHE'S SITTING BY AMANDA'S BEDSIDE LIKE NBD WHAT.

I'm sorry but that all required a lot of caps lock. There is nothing I can do about the intensity of these feelings. They are correct. In their intensity.

AND NOW TO ONCE UPON A TIME, which has been getting steadily more bonkers for the last... oh, I don't know, season and a half? This episode was a welcome reprieve from the Charming family and their Regina drama for a full-on Gold/Rumpelstiltskin/Belle storyline.

SHE GOT HER LIBRARY YOU GUYS.

She's so adorable. And I'm pretty sure I'm not the only queer on Tumblr wishing that Belle and Ruby would get together. And I'm right.

Wonderful. This week was big on ships.

Anyway, relatedly, I really loved the Hook story, and I love how Rumpelstiltskin gets to be basically every mythical beast. As far as I can remember, so far he's been not just Rumpelstiltskin, but also the Beast of Beauty and the, and also now the Crocodile from Peter Pan. I also really liked how they pretended you couldn't figure out who Hook was from the like fifty thousand clues they had leading up to the "Where are we going, Captain?"

Also, apparently Hook is the most popular new character ever to happen to Tumblr (gross overgeneralization), probably because he is pretty hot.

Also he stole Rumpelstiltskin's wife, who is none other than the craziest richest lesbian that ever happened to the L Word.

Dammit, now I just want to post pictures of Jennifer Beals. I'll have to watch that YouTube series she's on so I can do that.

Email ThisBlogThis!Share to TwitterShare to FacebookShare to Pinterest
obviously -> gif warning, i love dilshad vadsaria the most of like pretty much all people possibly, mike teevee, oh my god i love nolan ross so much SO MUCH, once upon a time, REVENGE mwahahhahah, the l word
Newer Post Older Post Home