Janet: "A demon has infiltrated the group."
Michael: "Not just any demon. Trevor is a diabolical, sadistic agent of evil. Might just be the single most dangerous creature in the universe."
Trevor (in Sydney): "Who wants lemon bars?!"

Trevor starts worming his way into the group (Eleanor: "It's so nice to hear someone say, 'Eleanor, you're the reason all this is happening' who isn't a judge in small claims court"), though he is also instantly over-the-top (you should've heard how he said "lemon bars," I almost clawed my ears off while trying to get that screenshot) and overly emotional (Eleanor: "Oh, we're doing a long hug. Are you crying?"). But he doesn't always keep the mask on.

Chidi and Simone go over the MRI experiment protocol, and Tahani asks Eleanor for help ("Darling, do you remember all the rules about what can and cannot be worn inside an MRI, more specifically, what if one's brassiere is very thin, but also very pure, gold"). Trevor asks Eleanor why she hasn't responded to any of the "dank memes" he's texted her, because he seems to be targeting her first (and Jason is ON BOARD with the memes). Jason asks if there's a way to get extra radiation (Simone: "there is no radiation"; Eleanor: "What you got in your hand there, bud? Is it a spider? Do you think taking a spider in an MRI machine will give you superpowers?" Jason: "He already bit me a bunch of times and gave me the power to swell up my hand!")

Michael's back, in a Dick Tracy outfit:

Trevor makes fun of him and starts a series of Michael attempting to make "Dick Tracy called" jokes - he is VERY bad at them. They bicker, giving us a recap of episode 1, and Michael says tough tatros, when Eleanor asks Chidi for help it's all over. (Trevor: "No, you're right! There's no way I'll get one of these bozos to drop out of an unpaid, rigorous academic study, especially when they're doing it with me, their overeager new best friend!")

Chidi tells Eleanor that they're not going to be able to have one-on-one ethics classes anymore, but now she'll have a bunch of fun people to study with (Trevor: "What do you say, E-street band, you up for a Segway tour of <bad accent>Australia, mate? This is a knife! On the bar-by!</accent>"). Trevor invites himself and the group to join Eleanor in getting one to eight drinks here:

This place is a nightmare. (Hostess: "If you purchase our Manifest Destiny package for $30, you can have anyone you want forcibly removed from the table!") 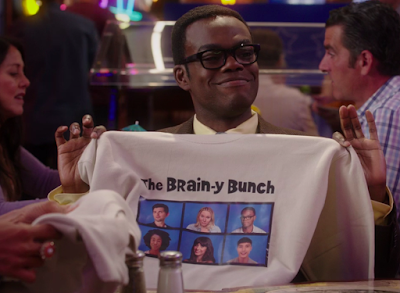 Eleanor is already 1000% over Trevor and everything he's doing. Jason is loving all of it, though. But, hold up, what's this?

That's right: Michael might have blown his shot by making contact with everyone in the group, but none of them have seen Janet yet. (The specialty cocktail is the 4th of July: "half an apple pie blended with Southern Comfort and Coca-Cola, served in a Chevy hubcap." I'm sorry but there are so many good gags in this horrible restaurant, I can't not.) Janet doesn't have her powers on Earth and she is having a hard time adjusting ("I will go physically pick those [beers] up, I guess, and then walk them back here with my feet.").

Trevor proposes that the newly christened Brainy Bunch should move in together! They could play pranks on each other or do ice bucket challenges or other memes! Trevor does a truly horrible and offensive Jamaican accent. Tahani is also looking disgusted at this point, and Eleanor is about ready to leave the table and never look back.

Janet and Michael are having tiny meltdowns about basically being humans.
Janet: "Humans only live 80 years and they spend so much of it waiting for things to be over!"
Michael: "Every part of my body is either too dry or too wet."
Janet: "My knowledge has stopped updating! The instant before we left, a man in Caracas, Venezuela, named Raul Benites (sp?) was eating a ham sandwich. Did he finish it?!"

Trevor also plants the idea in Chidi's head that it's unprofessional to be friends with the study participants, and Chidi has to go spin out over that idea by himself for a while. Eleanor finally leaves the table because she just can't anymore. Trevor proposes a drinking game for Tahani and Jason:
Trevor: "Every time one of you says something that the other can't relate to, you both drink!"
Tahani: "Could be fun. I once played a drinking game with Ryan Reynolds and Blake Lively at their macrobiotic farm with a particularly robust batch of homemade kombucha."
Jason: "Do I have to drink for every word I don't know?" 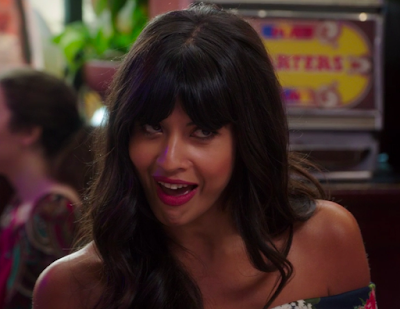 Michael and Janet are spiraling, Tahani, Jason, and Trevor are doing shots, and Eleanor goes to pep talk Chidi. He starts panicking that he and Eleanor may already be friends (Eleanor: "I'm going to go to the bar and get you a hot tea, or a regular temperature xanax"). Michael goes up to Chidi, playing the librarian, and boy does he make things weird. Michael: really bad at pretending to be human. He tries to get Chidi to go back to the table, and gives him some advice ("We have a saying in the library game: there's only room for one male subject in an academic study, so keep the one who got there first"). He slides away just as Eleanor comes back with a mug of steaming root beer (the closest thing they had to herbal tea). She doesn't want to be friends with the others; she came to Sydney to meet Chidi, not to hang out with Trevor. Chidi holds firm: he's not going to socialize, and that's just the way it has to be. Eleanor looks devastated.

Meanwhile, back at the table of drunks:

Tahani and Jason start flirting (Tahani: "Gosh, you're pretty." Jason: "No, you're pretty. Pretty beautiful!" Good one, Jason). Meanwhile, Trevor's holding a mostly empty bottle of vodka (we saw him with a full one just a few minutes ago) and trying to get Eleanor to join them for Logan Paul trivia.

Trevor comes out of a bathroom stall (which, do demons/Janets start having to go to the bathroom when they come to Earth? I feel like they didn't have to do that sort of thing in the Place) to find Michael and Janet waiting for him in the men's room. Ah, right: demons DON'T need bathrooms, but Trevor "like[s] the smells" ("and, I like putting my hands in the toilet so everything I touch gets a little bit of poop on it"). Trevor brags about getting Eleanor to leave a bar early, sending Chidi into a meltdown, and maybe getting Jason and Tahani to hook up. Michael tries to say that as long as they're there, Trevor won't win, but Trevor reminds them that hey, uh, they're supposed to be in a little room watching ticker tapes and at some point the Judge is going to run out of NCIS. He shakes Michael's hand ("ahhhh, poop hands!") - may the best demon win.

The next day, Chidi is looking R O U G H. Simone tries to reason with him, but he's paranoid about ruining the study; he's been waiting for an opportunity like this for years. Still, he needs to calm down and get some rest (Simone: "This morning, you bit into a raw egg like it was an apple." Chidi: "I thought it was hard-boiled." Simone: "Yeah, but still, the shell").

Back in the study room, Tahani sweeps in dramatically to apologize for her "uncouth comportment" the night before (and hands out formal written apologies: "further apologies for their appearance; I just couldn't find a proper calligrapher at five in the morning").

Jason was "a perfect gentleman" and helped Tahani home, after which he totally forgot where he lived and slept in a dumpster. He's sweet, though, ("You're the fanciest person I know, next to my friend Ronnie who drives a limo. He's in limos all the time. Ahh, what a life!") and Tahani's looking at him affectionately. Trevor thinks Eleanor's not coming to class (where Chidi has written "PALTO" which I'm pretty sure is supposed to be "Plato" because they're talking about the history of philosophy), and Chidi decides to go get her.

Eleanor's eating junk food and reading AUS Weekly ("HEMS-WORTHLESS: Meet LARRY, the Hemsworth Brother They Don't Want You To Know About") when Chidi knocks at her door.

Eleanor's talking about heading back to Arizona ("I just don't think the group thing is for me. I'm better when it's one on one, and we're both looking at our phones, and I don't know the other person, and we don't talk"). Chidi tells her how much she means to him (more or less) and asks her to give him three months - as a friend. Eleanor agrees!

By the way, for that whole scene Chidi was holding a socket wrench that he got from the front desk somehow. He's very tired.

Janet and Michael are once again waiting for Trevor in a bathroom. (Michael: "Dick Tracy called. He said that I was right about Eleanor and Chidi having an unbreakable bond." Trevor: "I don't think you understand how that joke works.") They have a tense tête-à-tête for a minute before, whoops, a portal opens and the Doorman shows up. The Judge wants to see them - all of them.

They're back on the giant scaffolding in an endless expanse of nothing, and the Judge is pretty pissed.

Trevor tries to get on the Judge's good side by piling on Michael but she flicks a finger and sends him flying off into the nothing surrounding the scaffolding. She gets right back to scolding Michael and Janet for messing with human affairs, making some pretty ridiculous gestures with her body as she does so ("Do you know how much weird stuff has happened because of your little experiment? England left Europe, that Hugh Jackman musical about P.T. Barnum? It made like $400 million. Also, the Jacksonville Jaguars are good now. I'm serious! They're gonna make the playoffs. Blake Bortles is kind of okay? Maybe?"). She explicitly says NO MORE MEDDLING. They're just regular humans who have to get into the Good Place on their own. Also, and worse: she's sending Michael and Janet back to the Bad Place, where Michael will be retired and Janet will be marbelized.

But, oh ho, Janet's powers are back online. And everything she tried to summon on Earth is materializing in front of them. 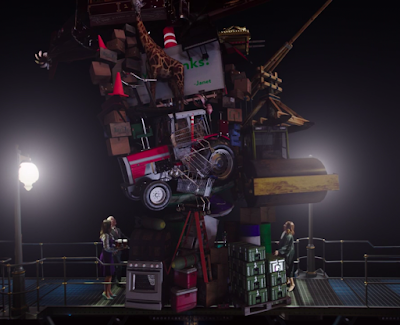 Janet and Michael make a break for it! The Judge starts flinging things into the nothingness but it's taking her some time. They stop at the Doorman, who looks at them for a minute before throwing Michael The Key ("Good luck, frog man. Pulling for you"). They run through the door with seconds to spare!