the good place, s03e07: the worst possible use of free will

Eleanor can't just take Michael's word for it that she and Chidi were in love in one of the reboots, so she's demanding that he show her, via the simulator Janet made for Chidi to help him dump Simone. Before they shut the neighborhood down, Janet backed up all the data, so they have access to everything that happened there.

There are, however, some issues with mortals reliving afterlife memories.

Half an hour or so later, Eleanor's looking back to normal, and they dive right into more memories from Reboot 119 (I'm going to write in the present tense, but until I say otherwise, these are all memories from the reboot).

Flashback one: Eleanor and Chidi are having an ethics lesson, and Eleanor, without looking, hands Chidi a tissue before he sneezes. He looks at her affectionately, she smiles back, adorable (if you ship them, which I do not - Teleanor 4eva).

Flashback two: it's Pick a Pet Day! When you pick one, "your pet will bond to your soul forever." Cool! Tahani heads off to look at the mythical pets, and Jason's excited about that too ("Maybe I'll get a penguin!"). Eleanor quickly picks up an iguana: 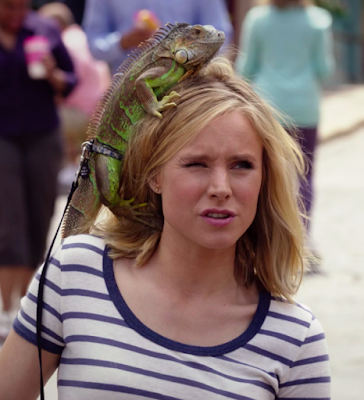 And Chidi's excited about some puppies, but, welp, there's a (probably, I'm not amazing at recognizing dog breeds) little golden retriever and a baby chocolate lab, and we all know how Chidi is with decisions. When he finally makes up his mind, both puppies have been adopted out to other people. His options, this late in the game, are a 16-foot python, a "tarantula squid" (not a real animal, I checked), or an owl.

When they get back to Eleanor's little clown house, Eleanor's gotten a tiny cowboy hat for her lizard and Chidi is hiding (and bleeding) under the kitchen counter from Spencer the owl. Eleanor, while wrapping Chidi's wound, tells him that she'll talk to Michael and see if they can't get Chidi a puppy. This warrants another moment of meeting each other's eyes and smiling (boof).

Tahani ends up with a mirror centaur: its human half looks exactly like Tahani, and acts like an even snootier version of her. Tahania, Goddess of Beauty, refuses to let Tahani or anyone else ride her and is quite demanding ("With whom can I speak about acquiring new shoes? You can't expect me to walk around in these flats all day like some common glue-factory hobo horse").

That night, Tahani hosts a party where everyone will get to transform into their pets for a little while, so Michael said that Chidi should hold off getting a new pet until he gets the chance to fly. But, alas, Eleanor has lost her lizard! She searches the neighborhood for hours until Chidi finally joins her - he gave up on the chance to fly to help Eleanor find her lizard. They kiss! (Barf.)

Afterwards, they spend all their time together, studying philosophy and eating popcorn shrimp, until they run away to Mindy St. Claire's.

Finally, somehow they end up in Michael's office, holding hands, telling Michael that it doesn't matter that he's torturing them because "love is stronger than anything you can throw at us." (Should've saved my "barf" for then.) Eleanor calls Chidi her soulmate, and Michael blows a raspberry. ("There's no such thing as soulmates, you dingus!")

Now we're back to present-day Michael and Eleanor in a library in Arizona. Eleanor's sad, because she no longer thinks she can love anyone; if Michael orchestrated everything that happened, then she was tricked into thinking she was in love with Chidi because of a series of events that seemed natural but were actually staged. (Eleanor: "Once you made us bond, the romance was inevitable. It's a basic reality show playbook. Put a bunch of attractive young people in stressful situations so they act like idiots and have sex with each other." She's kind of got a point.)

What follows is a masterful debate on free will vs. determinism, and I'm going to quote it liberally.

Eleanor, reading from Philosophy for Dingdongs... For Morons: "Determinism is the theory that we have no control over our own actions. Everything we do happens because of some external force which exists outside of our control. I didn't choose to fall in love with Chidi, because some all-knowing demon brought us together and scripted our lives... Everything in my life has been determined by my upbringing, my genetics, or my environment. Everything in my afterlife was determined by you [Michael]. There is no such thing as free will."

They have to relocate from the library (after it closes, it's used to shoot pornos) to a diner where Eleanor is in too much of an existential crisis to pick something to drink. Michael decides that all he has to do to prove that free will exists is find one example of a choice Eleanor made that he couldn't anticipate. He picks the moment from season 1 where Eleanor stands up at a neighborhood meeting to declare that she is the problem in the neighborhood. He says her doing that (because her friend was in pain) was the last thing he wanted ("ruined my whole plan"), so therefore, free will.

Eleanor says no, "the only reason I cared enough about Chidi to do that is because you forced us together." Michael argues that Eleanor made choices he couldn't control all the time, and picks another reboot to show her that he complained about it to her face.

In this reboot (444), Chidi's suspended in a floating purple ball of goo, in pain and unable to ever get out, but whoops, that's not the one Michael meant to show. In reboot 445, Eleanor comes to in the Good Place outside Michael's office, where his collar's unbuttoned, his bowtie's undone, his sleeves are pushed up, his desk is a mess, and when she sits down and asks where she is, he tells her she's in Hell. He asks her to tell him what he's missing (and shows her a screen of her bad memories, including the "ambien-hamster mishap," family issues, like "Mom once made mac 'n' cheese with wine instead of milk," enemies, like the Barefoot Contessa (note: one-sided) and Neil Degrasse Tyson (note: one-sided, from his side), and shames, like her "sexual attraction to Sam the Eagle"), but when all she does is ask questions, he gives up and resets.

Michael says that he "tried to script [her] whole afterlife, and devised a 15 million-point plan to torture [her]," but again and again she did things he didn't expect: free will.

Eleanor: "What if all your choices are pre-determined?" Maybe all of this is Michael being tortured by some mega-demon; maybe reality is a construct and no one can decide anything on their own. Maybe the mega-demons are being tortured by tarantula squids, and that's why they're torturing Michael. Maybe -

Michael pours his iced tea on Eleanor's head. Why? To demonstrate free will (and because she's being annoying). He thinks that this whole debate is a defense mechanism ("You saw yourself fall in love with Chidi, and it freaked you out to see yourself be so vulnerable"). Lest she forget, Michael reminds her that he knows everything about her, "including that nothing scares [her] more than vulnerability." Michael needs there to be free will because otherwise, everything that they're "doing to put more good into the world is pointless, and [he wants] to believe that it matters." He says he's using his free will to pick the gang up from the airport ("worst possible use of free will") and leaves her sitting in a puddle of iced tea. (Waitress: "You might wanna head out too. We're closing soon, and the second we do they use this place to shoot porn." Ah, fictional Arizona.)

Michael and Eleanor pick the rest of the Soul Squad up at the airport (where we see that Jason, along with taking the normal swag you get in first class, has stolen a flotation vest), and Eleanor locks eyes with Chidi and gives him a kind of wistful smile (he smiles back normally, of course). Eleanor apologizes to Michael, and says that him dumping iced tea on her made her realize that, "in a weird way, [they're] the only truly free beings in the universe, because [they] actually know what's up with the afterlife."

It's time for boldness; it's time to find someone to "serve as a blueprint for humanity." (Eleanor: "Rihanna! Good call. I don't know her personally, but I did see her in Vegas once and her calf brushed up against my tongue.") It's time to go to rural Canada!

Back in the demon labs, Shawn and some minions are ready to try out their new interdimensional portal by making Vicky (Tiya Sircar) go through it. She's been zipped up in a cocoon since last season. Good news for demon fans: she doesn't explode, but ends up on Earth! Now she, Shawn, and Val (Jama Williamson) are free to track down the Soul Squad.