So last night, I decided to listen to the debate on the radio, because I was crazy anxious, so I was sitting in bed and letting my new baby bunny, Thackeray Binx, hop around on my bed with me. 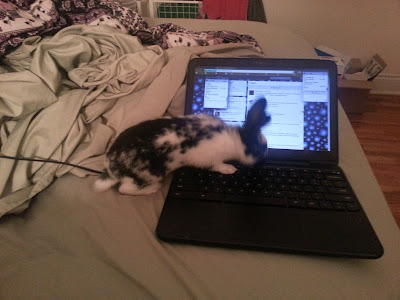 Oh, and the debate was pretty great. I didn't really think that Planned Parenthood would ever get a positive mention in a presidential debate, or pay inequality, or poverty, or LGBTQ and other minority rights, or the phrase "undocumented workers" instead of "illegals" (although SOMEONE said "illegals" last night, not that I'm pointing fingers).

Email ThisBlogThis!Share to TwitterShare to FacebookShare to Pinterest
obviously -> my rabbit mr thackeray binx ladies and gentlemen, politics - i am about them
Newer Post Older Post Home